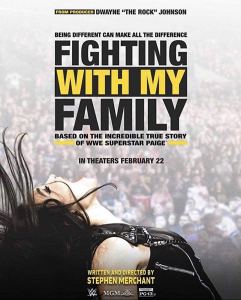 I am not ashamed to admit that I am still a closet wrestling fan in 2019. During my teenage years and the Monday Night Wars, I was one of the WWE’s biggest fans. I knew about Dwayne The Rock Johnson before most of you ever seen grace the big screen in The Scorpion King. Now having admitted all that, I am well aware of the wrestling business and how they are famous for altering their own history…

Which is what pissed me off the most about Fighting with my Family. Even though this is based on a true story and had amazing performances, this movie is a LIE. The Rock failed me and played to the mainstreams heartstrings instead of keeping it real. Argh, I left the theatre so ticked off. I even ranted the whole drive home how the story was altered and change to make you think that Saraya/Paige was this rags to the richest wrestler who was given a once in a lifetime opportunity on her first night and won the championship on her first time.

Spoiler Alert: She was already the women’s champion of the development brand and went on to become the first ever dual woman’s champion. But hey, that kind of story doesn’t sell. They altered their own history but omitting this enormous fact and that may have put more butts in the seats, but to the real wrestling fans was a slap to the chops.

As for the movie itself, it was fun and entertaining. Having spent a good chunk of his life in the business, Johnson made sure to highlight the highs and lows of the business and what it takes to make it there. There’s long road trips, depression, endless hours in the gym, pressure from writers, pressure from co-workers, and the ability to all get along when you’re chasing the same dream and there’s only one spot available.

You’d be surprised to know I enjoyed the movie right until the grande finale when Paige was called up to the big show. That’s where reality got blurred with fictional art and left a sour taste in my mouth. Overall Fighting with my Family is still a movie that could be enjoyed by everyone whether they are fans of wrestling or not. I let my personal emotions affect my rating because I expected a better ending. 6/10