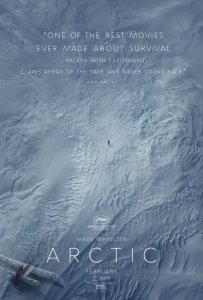 If you read the poster it will say that Arctic is one of the best movies ever made about survival. Although that could be true, I would lean the other way and say it is not.

I love cold snowy places and thought Arctic would shoot up my all-time favourite movie lists. It did not. I actually found it super hard to stay engaged in the movie with little to no dialogue. Even when Mads Mikkelsen speaks, it is in his native tongue and subtitles is the only thing that will get you from one scene to another. Whether it is mumbling to himself or talking to his unconscious wounded survivor, there really isn’t much to talk about.

It was very interesting to see how he survived and the creative ways he managed to stay alive. Of course, one disaster leads to another and he finds himself in some company both in a human and wild animal form. Instead of fighting for just his life, his guilty conscience now has another life to look after.

The movie never provides you with details of how they got to where they are so I felt the story never really got going. It is simply “here’s a guy who is literally stranded in the middle of nowhere, watch him try to survive.” There is no background on his training or education, which makes you wonder why he was in the Arctic and how does he know the landscape so well. I am picking away at the most random things about the movie because I wanted to like it, actually love it, and just couldn’t find that one hook to get me there.

Don’t get me wrong, there is definitely one thing to take away from the entire film and that is Mikkelson’s acting. Much like Tom Hanks in Cast Away, the main character is the only thing on the screen keeping the story alive and carrying you from one scene to the next. Sadly this movie focuses on the wrong aspects of his struggle to survive which took away all the things I looked forward too. 4/10