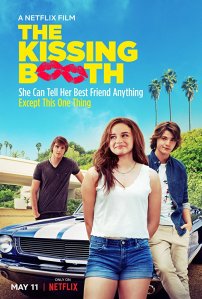 The Kissing Booth is one of those Netflix original movies I would have never given the time of day, that was until the fiance recommended we watch it. Turns out I was pleasantly surprised with how much I fell for the story and the characters.

People will knock this film and say it is cliche, and even though it has the best friend falls in love with the sibling of the best friend angle, it was unique. While one aspect comes together you see that another is falling apart. I thought the story did a great job handling both at the same time. The drama plays to the weakness of most teenagers, they usually ignore problems until they become bigger. Everyone in the film played mature high schoolers who did their best to stay strong in tough times whether it was in love or friendship. Emotions run wild at points, which adds to the drama of the overall story.

I really loved The Kissing Booth, which made me think that not all Netflix original romantic comedies would be bad. I know some of you will point out that this film is only rated 6.8 on IMDb and 17% on RottenTomatoes. You would be right to say this movie is garbage because there are so many others like it. But I’ll ask you, is there another film like this? I can’t think of another romcom off the top of my head where a kissing booth was so powerful to bring two people together and destroy a childhood friendship at the same time. I don’t even want to hang all my praise on the kissing booth, the characters are what won me over. This was a believable story with believable emotions. It felt real because these things happen all the time. Netflix just saw the opportunity to capitalize on it, so we can’t fault the movie or the actors themselves.

For what it is worth, I love cheesy romantic comedies so this particular movie was a hit for me. Having said that though, I am also not afraid to throw a cheesy movie under the bus if it doesn’t live up to my expectations. 8/10