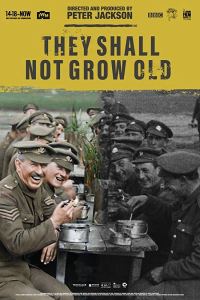 Peter Jackson is famous for many things and just when you think there wasn’t any room left on his resume, he gave us the documentary They Shall Not Grow Old.

This is really your standard World War I documentary, except it is really groundbreaking. Told through the lenses of those on the front lines, the narration is done by soldiers who actually lived in the trenches and were young boys turned to men on the battlefields of Europe. What Jackson was able to accomplish here is really amazing, despite the gritty films of the early 1900s. Advancements in technology allowed Jackson and his crew to clean everything up and make it 3D.

History buffs, war buffs, and even movie buffs can all sit back and be amazed at how one of the darkest moments in world history came to be so riveting and so alive. The subject material is gruesome and real. There’s no acting here, there’s no script, the only thing that was scripted is the overall telling of the story. From the beginning to the end, we get to see young men embrace the situation they are in, while not knowing if they will ever make it home or not.

There were times I thought the film dragged and the commentary just wasn’t as interesting enough to keep me entertained. I wouldn’t want to watch this movie again but appreciate the efforts people went through to bring history alive. I could see this type of film popping up in history classes across the country because like I said earlier, this is real, not fake.

If you have a chance to watch the making of, that was by far the most interesting aspect of the entire project. I didn’t know that Jackson had a massive collection of World War I memorabilia, so it was pretty cool to see how his vision of this film came to life. That 30 minutes featurette was well worth the wait. 4/10