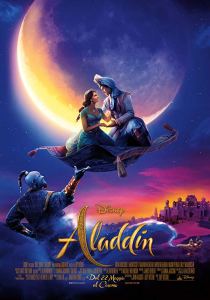 Disney owns almost every movie produced these days, so audiences have no choice but to watch their classic animated movies come back to life. No matter what they produce from here on out, Beauty and the Beast is the best they have released so far, which means they need to work extra hard to beat that.

Aladdin has many flaws, which included the fact director Guy Ritchie was behind the camera. His vision and direction in the editing room is my biggest gripe with the film. It looked so rushed and trashy. For example, when Aladdin and Jasmine are running through the streets, the whole sequence is so poorly pieced together that you are left to wonder if they performed everything in front of a green screen. When the scene ended, Ritchie just pushed the “fast forward” button on the playback and then threw the scene into the final cut.

Not everyone is impressed with Will Smith as the Genie. Most people have to understand that he will never replace the first genie, which allowed him to add his own bit of charm to the iconic character. Now having said, when you walk away from Aladdin 2019, you will feel that you just watched a Will Smith movie not a Disney movie about Aladdin. It seems harsh to say it, but when you think of the animated movie, you watch it because of the outstanding performance from Robin Williams. You just know he’s Genie in a movie called Aladdin. Smith’s performance, and the fact he is the only megastar in the cast, really overshadows Aladdin’s good spirit and his love story with Jasmine, taking away from the whole point of the movie. The film begins with and ends with the Genie character, which means this movie could have just been called Genie.

Noami Scott steals the show with her beautiful looks and powerful singing voice. She’s given a lot more story to work with here because it’s 2019 and movies are trying to promote equality more than ever. There is good chemistry between Scott and Mena Massoud, but he would have probably never made my final cut to be Aladdin. He can’t sing like she can and is acting is just ordinary, not extraordinary. There are far bigger flaws in the movie to be concerned with, so I can overlook the main character’s performance because he does connect with the girl of his dreams.

Although the Disney money making machine will chug on, they better step up their game if they want to keep people coming back to watch their live-action remakes. 5/10