Return to the Planet of the Apes

Return to the Planet of the Apes is Today 44 years old today, which means anyone who watches it has to look past the hand-drawn animation and rather bad storytelling to appreciate this sequel series to the film versions.

Fans of the franchise will see that iconic apes Cornelius, Zira, Doctor Zaius, and General Aldo all return to the story. The human crew include Nova and Brent, who continue their story from the second film Beneath the Planet of the Apes, as well as new astronauts Bill, Jeff, and Judy. Extra characters include the Underdwellers (the nuclear people from Beneath), the ape army, the ape council, and a group of simian apes who live peacefully in the mountains like Monks.

The 13-episodes follow the main storyline of humans who are fighting for their lives in and around Ape City, and General Aldo gunning for total control of the Ape Council. Bill, Jeff, and Judy want to help the humans stuck on the planet fight for themselves, while General Aldo tries every trick in the dirty tactics book to force his agenda on the council. Every episode presents new challenges and new conflicts that pushes everyone to their limits. General Also is usually left to regroup towards the end of the episode while the humans are one step closer to their goal of peace.

The overall story arc follows the same plotlines from the book and movies. The ape’s council know their past but refuse to acknowledge it. Zira and Cornelius do everything they can to help the humans, and General Aldo will stop at nothing to get what he wants. 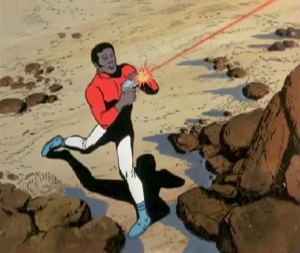 Some of the more exciting aspects of the show that are not in the movies are advancements in technologies. In one episode the apes are flying planes from World War II, and the humans destroy the hangars with a locomotive train. There is an entire episode devoted to a hot air balloon journey to the mountains that goes terribly wrong. A significant plot device for the whole story arc is a laser gun from the spaceship. This small device cuts holes through anything, and if you would believe, it was powerful enough to divert a volcano. Out of all the ape civilizations we’ve been exposed to, these animated apes are the most advanced. They even have songs that play on an all ape radio station that apes can listen to while driving in their cars! There are TV news stations with nightly broadcasts. Apes also rewrote some of the most famous books ever written and remodelled some of the famous works of art. The military is designed just like a human army, equipped with tanks, jeeps, and bombs.

If you didn’t like the nuclear people from Beneath, then you may not like the Underdwellers. They are not as creepy as the film version, but still, cause a whole lot of headaches for both ape and human. For some reason, this storyline has a whole bunch of wild creatures that look like dragons and sea monsters, which serve absolutely no purpose besides to raise the tension as the humans and apes gear up for a fight. These episodes could have been so much better if they focused their attention on developing the struggles of apes and humans, without these extra monsters.

You can actually buy the whole series on DVD like I did. I’ve now watched all 13 episodes twice. I needed a second opinion before I made a final decision on whether or not this was enjoyable. Although I think the story is engaging enough and will keep you clicking next to see what happens, the series just ends on another hot air balloon journey. I understand that production was stopped because this show was considered a failure, but in the end, you may feel like this was a complete waste of time. There is absolutely no way to find out what happens at the end when they finally get their hands on the precious zoo book. You are left to wonder if the humans could survive the massive attack? Did General Aldo eventually serve his punishment and abandon his quest for power? Do the apes find out about their own history from the zoo book? Do the astronauts get a chance to return home? Will there ever be peace? Does baby Milo (Caesar) ever come into the picture? So many questions. No answers. 5/10

If you would like more information about Return to the Planet of the Apes, I’d recommend the Wikipedia page https://en.wikipedia.org/wiki/Return_to_the_Planet_of_the_Apes, which goes into further details about the development of the show. There are episode summaries and several descriptions on how the show is related to other Apes storylines.