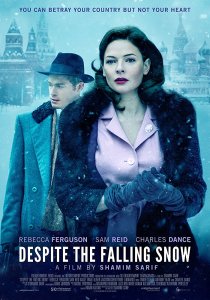 The only reason I dared to watch Despite the Falling Snow was that Rebecca Ferguson was in it. I’ve never been a huge fan of Cold War-related spy movies, so this would have never been on my radar at any given time. Rebecca takes on a dual role in the film, playing the American spy in the 1960s and then her niece in the 2010’s. The problem with both characters neither has a compelling story to get heavily invested in. You’d never think this beautiful woman would be a spy, but she falls in love with the guy she’s stealing secrets from and then the wheels fall off. There are lingering questions about what happened to her character from the past, with no real answer given. Did she fade away? Did she ever make it back to America? Maybe I missed something along the way, but thankfully this movie is short and doesn’t dig deep enough into the story to be a complete waste of time. Overall though, Despite the Falling Snow will definitely be a Cold War spy movie you’d soon forget.  3/10