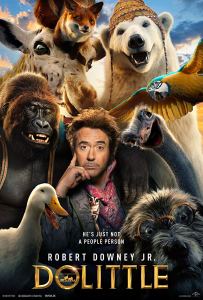 Dolittle got released in January, so let that sink in for a moment. Hollywood apparently thought this movie was not going to be any good or successful, so they pencilled it in for a time when no one cares about new releases.

Robert Downey, Jr did not take on this role for the movie. That guy has more than enough royalties from Iron Man that he never has to work again. One would assume he did this role for his kids. He probably wanted to show people he can act outside of the CGI blockbusters. I mean, these are the only two things I can think of because Dolittle was painful to watch.

You can’t take any movie seriously when every character is a CGI talking animal. I won’t even say that these guys were over the top or that their jokes missed their marks, it was just a bad experience all around.

The only positive thing I took out of the film was Michael Sheen is a great bad guy. He didn’t have a lot to work with here, but he pulled off a merciless guy in a kid’s movie.

My hope is since this movie bombed at the box office, we won’t get a sequel…even though they left everything open for one. 1/10