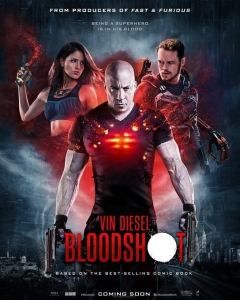 Vin Diesel will always be remembered for one role, but when he’s not driving those fast cars, he has the tendency to make some very questionable movies.

Bloodshot would never fall in the same category as say The Pacifier or The Last Witch Hunter because it is a tad bit better.

Like a lot of movies these days, CGI fistfights and gun battles ramp up the action and suspend our disbelief for two solid hours. Most people find this entertaining, although it needs to be pointed out that this trend can wear you down after 200+ movies a year.

Hailed and criticized for CGI action scenes and a terrible plot, Bloodshot won’t be the worse thing you could watch in the final days of the movie theatre. It was brought to my attention after the fact, but I seemed to miss the whole point of Diesel’s reprogramming. As the story unfolded and the hitman hero crossed names off the list, I actually fell for the narrative. The sad part is, I was misdirected and went with it because I didn’t pick up on the hints from the trailer.

When the bad guy, who was pretty apparent from the beginning, finally did all the bad guy things, the story kinda rushed to its conclusion. The ending provided a bow on this particular chapter, which also left everything open for a sequel.

If you were to take anything away from the film, my hope would be Lamorne Morris’ performance as hacker Wilfred Wigans. He is the comedic relief we needed in an action movie that lacked a good story to back up the non-stop action. 7/10