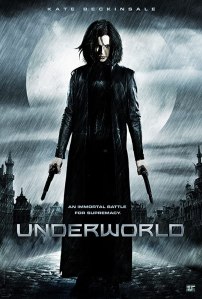 There are many actors/actresses in Hollywood that find their true calling. Kate Beckingsale had a handful of movies under her belt when Underworld came out in 2003, but her role as Selene, the Death Dealer, is the role that she’ll be synonymous with for the rest of her life.

I haven’t seen this movie in ages, so naturally, I remembered little to nothing about it. I forgot Scott Speedman was in it, which was surprising cause I only knew him from The Strangers and nothing else.

The first thing I noticed about the film is the dark backdrop. It is always raining or overcast. Yes, I know this is a movie about vampires and werewolves, which can only come out at night, but I like movies set in darkness. It adds a layer of tension to the story and the actions of the characters. You never know what is hiding in the shadows, which can alter any scene at any time.

When all the blood was shed, I had a lot of questions. I wondered if the movie was based on a book or graphic novel, and to my surprise, yet again, it wasn’t. That made me appreciate the fact this story just randomly picks in the middle of a centuries-old war. There’s no need for a beginning, and who knows how it will end. It was a perfect starting point that had a lot of introductions and backstories to include. I wondered why now, after all these centuries and carnage, did the Underworld story finally need to be told.

I liked a lot of different aspects of the film and plan on watching the rest of the series so I can see how things progressed for Selene, Michael, the vampires, and the Lycans. Stay tuned. 7/10