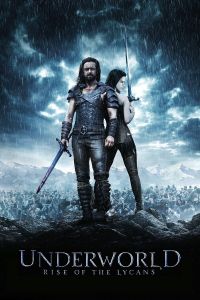 Underworld: Rise of the Lycans may be one of the better entries into the Underworld series. What impressed me the most was how all the original characters came back to reprise their roles. Considering it was six years removed from the first installment, most people would have had something else to do.

What makes this film a substantial addition to the ongoing war between vampires and Lycans is it’s compelling back story. Some could argue that this film should be the first one you watch, but since it came out years after, who is to say this movie would have ever gotten made. Once you have seen the first one, it is hard to go back and forget whatever you knew to watch this one.

Rise of the Lycans works because it’s a great backstory. It’s one of the rare prequels that could be on the same level as the original. There is no love lost between the two sides, which means there’s going to be a lot of bloodshed like the other movies. Why this movie was successful is how it showcased the beginning of the war and got deeply invested in the characters that shaped the first movie. It showed us the brave souls who were mistreated for generations before finally taking a stand and rising up to defend their own.

Michael Sheen is a vital part of the overall Underworld saga, and it only took three movies for him to really shine. He may have been the “bad guy” in the first movie, but this time around, he’s a hero. The bad guy still just came later and at a high cost.

The theme of love conquers all finds it’s way into the fabric of this story and the series as it moves forward. This may be my wife’s favourite entry into the series, while I still consider the first one to be a tad bit better. 7/10