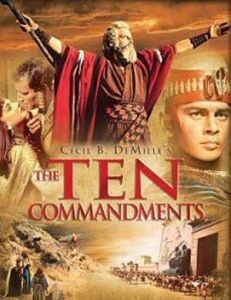 Those would be only three words used to describe one of the greatest movies of all-time, The Ten Commandments. If you don’t believe me when I say it’s one of the greatest, turn your TV on any Easter weekend and this movie will be played in its entirety on a primary network channel. There are not too many films that hold are held in that high regard.

As this movie approaches it’s 64th anniversary, one has to sit back and marvel at the special effects that were way before it’s production time. Whether it was the seven deathly plagues, the burning brush, or the lighting strikes to the tablets, it was just amazing to see Cecil B. DeMille’s vision come to life. The highlight of the film will always be when Moses (Charles Heston) parts the Red Sea. No matter which way you slice it, that was some beautiful cinematography.

Whether you are a religious person or not doesn’t mean you can’t sit back and enjoy one of the Bible’s most famous stories. In the time since this film’s release, there have been countless other movies that depict the same story, but none have come even close to the level of The Ten Commandments.

If you look up this film’s ratings, you’ll notice it has a 7.8 rating on IMDb, which is sort of low considering the 92% rating it has on RottenTomatoes. Even the audience score is 87%. I can understand that some people don’t agree that this film is excellent from start to finish. Most times, I wait out the opening act to get the final one. The action is few and far between as the story builds to one of cinema’s most iconic finishes. I don’t mean Moses walking down the mountain with the tablets either, I’m talking about the journey to get there.

Personally, I only want to watch The Ten Commandments at Easter time, much like I only watch Love Actually on Christmas Day. I am not here to compare the two, just here to say some movies hold a special place in our hearts and minds and should be enjoyed once in a while instead of regularly. Time apart makes the heart grow fonder, they say. 9/10