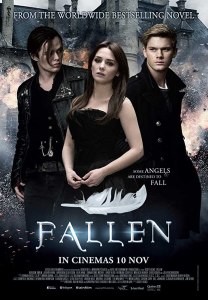 Fallen would probably not pop up on anyone’s radar unless you read the books.

I was skeptical about a movie that has spawned several sequel books, yet only one film to date. These thoughts made me wonder how good the source material really was.

Now having said that and after watching the movie, I am on board with a sequel, should they ever make one. You may think you know angels and demons, but you have never seen them like this before, at least I haven’t.

The story won me over based on the romance. Angels who have been in love for centuries by suffering dire consequences when they act upon it. That has to be tough on the mind and the soul. Yet, every 17 years or so, impulses get ignored, and they all get a reset in a different time and place.

I liked that aspect of the story. That these souls were meant to be together, yet life causes them to stumble. Because their story remains unwritten, they have to suffer through another 17 years together.

I don’t know what the whole series is about and or how it ends. We know that I will probably never pick up the books to find out, I will just have to ask my wife what happens.

Fallen will be a hit in some social circles and be ignored in others. I thought I was in the second crowd, but I ended up being in the first one. It may be worth a second look someday. 6/10