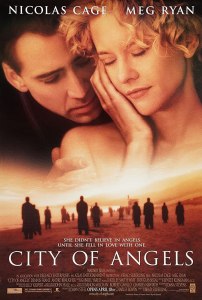 It has been over 20 years since City of Angels graced the big screen, and the only thing really worth remembering is Iris from the Goo Goo Dolls.

Now I don’t want to take anything away from the movie, story, or characters, but face it, you feel like you’ve seen this movie before.

The impossible love becomes possible, and the angel who plays a creep most of the movie gets the girl in the end. Or does he? The twist ending is heartbreaking and is one of the rare times Hollywood throws you a curveball.

It had been a long time since I had seen this movie, but since it is a unique story, there are many parts worth remembering. Nicholas Cage has gone on to be in 100 films since then, but he was at his best in the 1990s. Since this movie came out at the tail end of the decade, you can begin to see his best days were behind him.

Meg Ryan also peaked in the late 1980s and into the 90s, but personal decisions and some rather odd movie role selections made her disappear. These two will be forever linked in this movie, at a time when they were household names.

There have been many movies about angels, and there have been even more movies about love. Sometimes the combination works, and sometimes it doesn’t. City of Angels may have had box office success back in the day, but I don’t think it holds up to today’s standards. 5/10