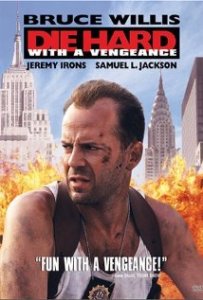 Die Hard with a Vengeance is the third instalment of the John McClane (Bruce Willis) saga. It is one of the weaker entries into the franchise that centres around the misfortunes of the world’s unluckiest cop.

After destroying a skyscraper in Los Angeles and then the Dulles International Airport in Washington, DC, McClaine is divorced and fighting criminals in New York City, that is, until someone from his past comes back to life.

One bomb here and another here, McClaine is sent on a wild goose chase across the streets of Manhattan with a man he met named Zeus (Samuel L. Jackson). Meanwhile, while all the cops are distracted by cleaning up various terrorist attacks across the city, our villain is robbing the federal government blindly.

Lucky McClaine is smart because he figures everything out, but is always a step behind. The race to save the day is unlike anything else we’ve come to see in the previous movies.

Despite facing his weakest villain yet, the potential for a high body count is growing minute by minute. I say that Simon (Jeremy Irons) is the worse villain because he just never strikes fear. Sure he may be armed with a massive army and an endless supply of weapons, but he’s off-screen for half of the movie, just phoning in his lines.

The thing that saves this movie from being a complete bomb is the chemistry of Willis and Jackson. They are both filled with positive and negative energy, which compliments the other when the moment arises. Whether swearing at each other or defusing a bomb together, these two will save a city and have a hundred stories to tell that real best friends only could wish they had. 6/10