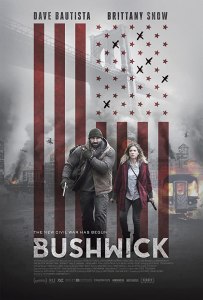 If memory serves me correctly, Bushwick actually got released at the theatre here in my city. For reasons I can not remember, I passed on this film, despite the fact I do enjoy Dave Bautista’s acting.

Fast forward to 2020. I was browsing Netflix for movies set in New York City. I rolled the dice on this film and was disappointed with the results.

Bushwick had a bizarre premise. The United States broke out into a civil war (again), but the South chooses one particular street in Brooklyn to launch an attack to start it all.

The whole idea is slightly weird and really sucked the life out of the movie. We meet Brittany Snow’s character Lucy and follow her as she makes her way to grandmother’s house amongst the chaos. Why she had to live, no one really knows. Along the way, she teams up with former Marine Stupe (Bautista) and, together with the make it through the battlefield known as Brooklyn.

I was so bored watching the movie. Neither the killing or action sequences could keep me interested. Even though this movie was terrible, there was a silver lining in one scene.

Bautista has a moment with about 16 minutes left. Both characters (Lucy and Stupe) find themselves in an abandoned laundry mat, where Bautista’s character explains how he gained his skill set and why he did what he did. Personally, I thought it was the moment of the movie. It really showed that Bautista could act. His story made me actually care about his character for the first time. Better late than never, right?

After that, the movie rushes to the finale, and it’s not even worth talking about because none of this movie makes sense. I wouldn’t recommend this film to anyone. 1/10