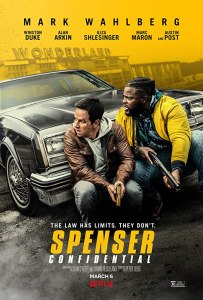 Mark Wahlberg made his Netflix debut in a cop film that is filled with dry humour and plenty of violence. I found myself laughing out loud as Wahlberg struggled to adapt to life outside of prison while trying to solve a murder that he has no business getting involved with.

I love any movie that Alan Arkin is in, and this one is no exception. His dead-pan delivery and carefree attitude really compliment Wahlberg’s character.

Another substantial part of Wahlberg’s drama is his ex-girlfriend, played by Izza Schlinger. She has a small hilarious part at the beginning and we get to see her role expand and play a vital part in the ending. It wasn’t what I was expecting, but it does compliment the comedy of the story.

One of my biggest grips with the film is the “corrupt cop” plot that the entire story is built upon. I have asked this question many times before, and I am not afraid to ask it again. Why are cop movies always centred around dirty cops? I understand that these stories sell tickets and peak people’s interests, but when will we ever get a drama movie about good cops?

It took me a little while to catch up with the latest Wahlberg release but I thoroughly enjoyed it. I will welcome a sequel, if and when, they decide to make one. It will be interesting to see where the story and characters go from here.

Of course, I love movies that bring me back home and star the locals who grew up there. Spenser Confidential is another movie set in Boston that lives up to the hype. It has hovered around the Top 10 most viewed films on Netflix, so if you haven’t seen it yet, I’d recommend it. 7/10