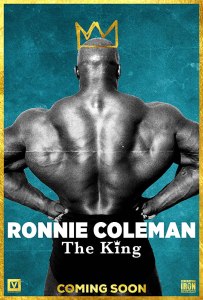 I pointed out in my review of Pumping Iron, bodybuilding has never been a particular interest of mine. However, a recent interest in becoming a personal trainer has made me do some research into the world of bodybuilding.

While browsing Netflix for videos about the subject, I came across Ronnie Coleman: The King. I can’t lie and say I knew who Ronnie Coleman was, but I am sure that somewhere along the way, I have heard his name before. I probably even seen highlights of the beast as he won the Mr. Olympia title eight years in a row (1998-2005), just never paid enough attention.

Known as one of the greatest bodybuilders in history, Ronnie’s story is unique in the sense he came out of nowhere to become the King of the sport. Once a police officer in Arlington, Texas, Ronnie, who excelled at sports in college, got convinced to become a bodybuilder, and the rest is history.

What amazed me about this documentary is the state Ronnie finds himself in today. Years and years of torture on his body has left the man known as the King on crutches. It is sad to see Ronnie as a shell of himself at his peak, but his “never say die” attitude is what made him stand out, even after all this time.

For a guy who was on top of the world, it is inspiring to see how he makes it through every doctor’s appointment and surgery. His happy go lucky personality is supported by his loving family, who continue to be there every step of the way.

Ronnie Coleman may never be the same again. However, his career is one of the most remarkable journeys that could inspire just about anyone. I barely knew anything about the guy, but really appreciated this documentary as it opened my eyes to the guts and determination it takes to be a bodybuilding champion. Winning is never easy, and if you want to be successful in anything, you got to put in the effort. Ronnie did all that and more. 7/10