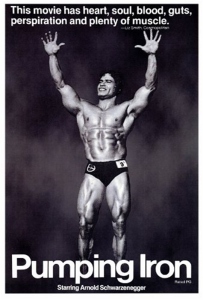 Last summer (2019), I watched Pumping Iron for the first time. I was in the middle of a workout program as I prepared for my wedding that August. I will be the first to admit I have never been a huge gym rat, and eating healthy was always my second option at the table.

I have some friends I grew up with who started to lift while we were in high school. To this day, they have maintained a healthy lifestyle and look great for all their efforts. As I embark on a journey to get in great shape, I had to look at the career of one of the greatest bodybuilders of all-time, Arnold Schwarzenegger.

Arnold may be famous for so many iconic Hollywood roles, but no matter what he does, he’ll also be remembered for Pumping Iron. This documentary showcases the buildup to the 1975 Mr. Olympia contest. Arnold is gearing up for one of his toughest opponents, Lou Ferrigno.

This behind the scenes look of the world of bodybuilding takes you to places never seen before. You are right there on the squat rack with all the competitors, whether they are training in the United States or Europe. When the guys are not getting their pump on, they are interviewed about why they want to compete at the highest level, what it would mean to them to win, and the challenges that come with fighting against Arnold every year.

Pumping Iron may feel very dated compared to documentaries filmed in the 21st century, but this film could still be considered the gold standard when it comes to bodybuilding. If you search any videos about Arnold on youtube, almost every workout-related video features footage shot for Pumping Iron.

The majority of sports have evolved throughout the years. Weightlifting hasn’t changed. If you want to look like Arnold or Lou, you need to go to a gym and pick up the weights, it is really that simple. Yes, workout plans and eating habits have changed, but once you make a commitment to be your best self, there is really nothing that can stop you. 8/10