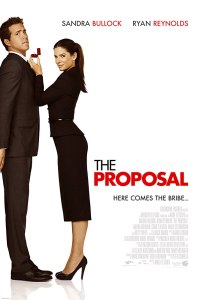 My review and thoughts on The Proposal will shock the majority of you. I have never been a fan of this movie. Despite the intense chemistry between Sandra Bullock and Ryan Reynolds, I just couldn’t find space in my heart to love it like so many have.

As an immigrant myself, I was teased many times over about getting married to stay in my new country. Thankfully I never had to resort to such a thing, but I can relate to the problem between the main characters.

Bullock’s character is a jerk for the entire film. We all love to see a good girl gone bad, but I wasn’t in on this one. Reynolds stayed basically the same. His sarcasm and quick comebacks bring entertainment to the story.

You can that as the story unfolds and the problem becomes more prominent, that these two develop genuine feelings for one another. Even though everything is a fraud and people come to learn the truth, hearts do get broken.

The ending was predictable from the get-go. Even though it could have gone down a handful of different ways, it ties everything up nicely.

The best parts of the movie have to be the immigration interviews, where Reynolds and Bullock have to act like they know enough about the other to keep the federal government from looking into the vows. 6/10