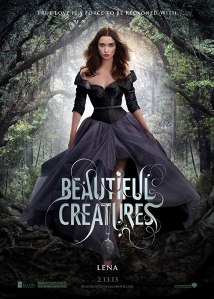 Before I jump into my review of Beautiful Creatures, I need to be honest with all of you. When this film came out in 2013, I was there on opening weekend. It piqued my interest for several reasons, but in the end, it didn’t hold my attention. I feel bad saying it, but I slept through this entire movie, only waking up with minutes left, confused about what I was watching. Because the film didn’t excite me, I have always considered it one of the worse movies I’d ever seen*.

Fast forward seven years later, my wife suggested we give it another chance. With a fresh take on the movie, I was able to enjoy the adventure known as Beautiful Creatures. Over time I’ve grown to appreciate the cast members on different levels for their abilities, which included Jeremy Irons, Emma Rossum, Zoey Deutch, Emma Thompson, Viola Davis, and Alden Ehrenreich.

I liked the story, where ordinary people have magical powers that they mask to blend in during modern times. The fantasy genre has always been hit or miss with me, but when you sprinkle a love story in it, I usually fall for it. This isn’t your usual “forbidden love” kind of story since there are so many more factors that play into a relationship that just can’t be. Given the ongoing battle between good and evil, the characters sold me on their true colours, whether it was for good or bad. You spend the whole movie building up these impressions of these characters, but in the end, you will have a totally different perspective.

Beautiful Creatures will never sit at the top of any of my favourite movie lists; however, I will remove it from the worse movie list. This fantasy romance movie wasn’t as bad as I built it up to be. I would be open to watching this again someday to look for little clues I may have missed the second time through. 6/10