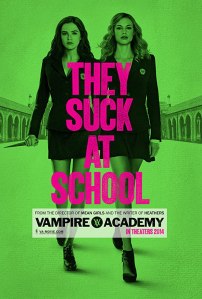 Many moons ago, I remember how excited I was to go see Vampire Academy at the theatre. If memory serves right, this film, which currently holds a 5% rating on RottenTomatoes, was in and out of the multiplex so fast I never got to see it. Fast forward a few years later, and I finally caught up to it. I don’t recall loving it right off, but I wasn’t opposed to ever watching it again either.

Since my wife considers this film a guilty pleasure, I was interested in seeing it again and finally writing a review.

I definitely do not agree with the thousands of people who have a hate-on for this movie. It is not the worse movie, let alone one of the worse vampire movies ever made. Has anyone ever seen Abraham Lincoln: Vampire Hunter? I rest my case.

Of course, my favourite parts of this film involve Zoey Deutch. She’s one of my favourite actresses, and I love her character in the story. She acts as the narrator to all the silly drama at this high school, but it was fun to watch her progress from scared guardian to a badass protector.

I can understand why most adults would hate this movie. Maybe they read the book (which I haven’t) and didn’t like the film adaptation. Or perhaps it was because this movie felt like a low-budget high school drama. I can’t say that they were right or wrong, I am just saying I understand why some people would be turned off by petty things and some awkward story angles.

Having seen this movie a couple of times now, I can see why it would be someone’s guilty pleasure. It follows a formula laid out from more than a dozen movies that preceded it. They didn’t break the mould with Vampire Acamedy, but then again, they didn’t need to. There has been a lot of talk about a sequel, although nothing has ever been confirmed since this movie ended up bombing.

Even though the story lacks in several areas, I enjoy the cast enough to look past all that and enjoy a movie about high school vampires and their problems. 6/10