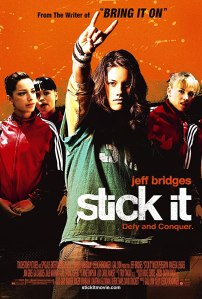 Stick It is a mid-2000’s film about a rebel gymnast, played by Missy Peregrym, who had all the skills in the world but let her attitude stand in her way.

What surprised me the most about the film was Jeff Bridges is one of the main characters (the coach)! Known for so many iconic film roles throughout his career, I never expected him to be a gymnast coach, let alone be a jerk coach. Even if you love the lead character, Haley, this movie wouldn’t be complete without Bridge’s cheeky behaviours. One of the best parts is when he is recruiting parents to send kids to his school—classic con-man stuff at its best.

I understood that Haley had problems at home and lost all her desire to be a competitive gymnast. When forced back into the program, she spends the entire time trying to fail and let the team down. Why her character works so well is her desire to go against the system, a system designed to never change, never develop a new personality. She is a hit with the girls for bringing a modern edge to the team, while loathed by others whose parents have brainwashed them into the system.

Stick It is the classic tale we have seen time and time again. The rebel acts all tough but has a soft interior. It will take a lot to break them and get them back, which is precisely what happens with Haley at the championship tournament. You don’t usually see a whole team break the rules to show defiance, yet that’s how the finale goes down. People may think it’s because they want to be trouble makers, when in fact it is about standing up for one another, being a team player, and leader. You may think their actions are crazy, although all their moves were calculated.

Much like other films in the gymnast and cheerleader genres, I’m okay watching these once, maybe twice. I just wouldn’t make a habit of watching these kinds of movies regularly. 5/10