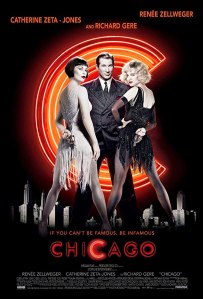 Chicago was the best picture winner in 2002. It also won the best supporting actress, direction-set decoration, costume design, film editing, and sound. The film was also nominated for seven different awards, that it didn’t win.

Most musicals these days don’t get this kind of recognition no matter who is in the cast and how big the songs are. Chicago is one of the rare gems of the genre. I say that because most people probably wouldn’t give it the time of day. My wife loves musicals but had never seen this one. While in New York for the holidays, I convinced her that we should see the performance on Broadway. I can say that it didn’t disappoint.

Many months later, we finally got to see the 2002 film because Razzle Dazzle was on my mind. There were some fun debates in our house after the movie because I thought Richard Gere was excellent, while she thought he was not a great singer. Meanwhile, we both came to appreciate John C. Reilly a lot more since his solo performance was one of the film’s best songs.

The one thing I remember after watching the movie a decade later is the performance of Catherine Zeta-Jones. She was amazing. Although the majority of the story is focused on Renne Zellewegger’s character, and she has more songs/routines to perform, this was one of Zeta-Jones’ best performances.

It made me chuckle at how many other characters I came to know all these years later. I had totally forgotten that Queen Latifah and Mya were both in this. Dominic West, Christine Baranski, and Colm Feore even had roles.

One can only imagine the time and effort it took to master the songs and dance routines. I applaud their efforts, and so did the Academy. I think that even 18 years later if you haven’t seen Chicago, you are missing out. 8/10