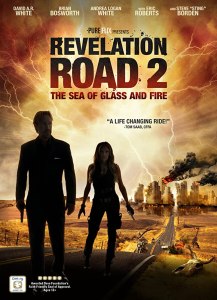 After joining Pure Flix, I started to watch the Revelation Road saga. While watching the first one, I realized that this franchise wasn’t for me, but I had to continue on. My disdain for these wild Christian movies continued with the second instalment, The Sea of Glass and Fire.

David A.R. White returns as Josh, the man with no past or present and has a particular set of skills to seek revenge. His ongoing battle with a gang led by Hawg (Brian Bosworth) is the main focal point of the story.

The first film showcased the events of the rapture, while the second one takes place immediately following that. Josh continues his journey home, but a lot of people are trying to prevent that from happening.

Revelation Road is the Christian version of mad max with many other intriguing plot twists thrown in. I’ve done my research about the movie and tried to understand the reviews other people have written.

I did not sense the religious theme that so many write about. I never realized that Josh was fighting the urge to be good and “saved” or resort back to the days he was a hired gun for the government. Either I am really clueless or didn’t pay attention because they said it was right in front of me. Quite honestly, it may have been, but they went about it in an awkward way that I never felt it was about that.

Like other movies before it, sometimes I have a hard explaining what I watched and what I took away from it. Revelation Road 2 is just another one. I may need to watch it again or maybe five times to fully understand or appreciate the story. 1/10