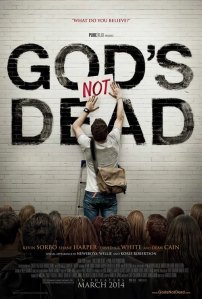 In 2018 we went to the theatre to see the third installment of the God’s Not Dead franchise. I had to dig through reviews to remember how much I hated the movie. Part of me wondered if the first two were that bad and whether or not they were connected in some way or not.

Fast forward to the present day, when I had a chance to watch God’s Not Dead. As the second movie I watched on Pure Flix, I was impressed and wondered if all my movie selections were going to be this good.

The movie currently holds a 4.4/10 rating on IMDb and a 13% approval rating on RottenTomatoes. Audiences seem to love it, though, because it has a 75% rating.

I’ll be the first to admit that a movie’s plot tends to turn critics into lovers or haters. There is always a lot of pushback when Christian films get released. People feel “the message” is being forced down their throats and then sabotage people’s opinions for being set in a particular genre. If you don’t like Christian movies, don’t watch them. It’s really that simple.

God’s Not Dead is a unique film because it tries to explore God’s place in today’s society. What won me over was Professor Radisson (Kevin Sorbo), who refused to believe God existed. Instead of talking about it, he just told his students to hand in a paper, for a good grade, that admitted God’s Dead. The best character, Josh (Shane Harper), refuses to accept that and offers to prove it to the Professor and the class. I loved how much thought Josh put into his presentations and wouldn’t let his personal life affect his efforts. People think he’s crazy and his girlfriend dumps him, but he presses on.

The ending is a little bit surprising and rushed, but it does bring an end to other minor character’s storylines. One of the best things about the conclusion is the Newsboys concert. They make a handful of appearances throughout the film, but their performance was a great way to end the movie. 8/10