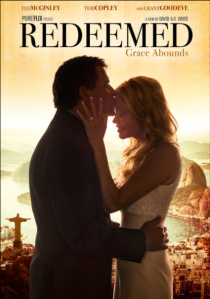 People always say that life has a funny way of working out sometimes. Some people make mistakes and get a second chance to correct things while bringing balance back to their lives.

Paul (Ted McGinley) owns a company that is on the rise. He’s got a pretty wife and success that comes with his growing portfolio. The only problem is his best friends in the company want to destroy everything he’s worked for, and a beautiful liaison from Brazil catches his eye.

One thing you may think of right off the top is Paul is a cheater. Thankfully, he never sunk that low as a husband, but his wandering eye will only lead to more complications.

I knew McGinley as Jefferson D’Arcy on Married with Children. I grew up watching this guy and always enjoyed how entertaining he is as an actor. It was different to see him in a more serious role, a Christian role when I’ve only ever known him as a joker and playboy. I was disappointed in his character Paul, but he did manage to redeem himself, which was all I was hoping for.

The movie is kinda dull, to be honest. Even though it is short at 1:28, the story is told from a flashback perspective. Paul is on a plane, talking to a guy on his way to Brazil. Through the flashbacks, we get to see everything that led him to take this trip. The trip was nothing exciting, except he came clean to the potential buyers about everything to save his company.

What I didn’t expect was how he ended up in the Brazilian church and how that one afternoon changed his life. The best part, for me anyway, was how the film came to an end. If saving his company wasn’t his most significant issue, he’s about to renew his wedding vows and can’t come up with the right words. What made me smile was the guy from the plane became his best friend and his best man. It was an unexpected twist that provided a happy ending for everyone. 3/10