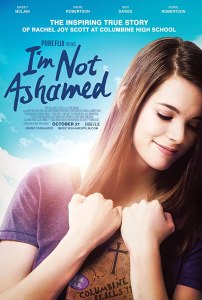 The Columbine High School shooting changed the way American kids went to school. Rachel Joy Scott was a junior in high school and one of the first victims on that fateful day. I’m Not Ashamed is her story.

Rachel lacked direction and purpose in life. She wanted to do so many things in life, like helping those less fortunate. Instead, she found herself partying and hanging out in the wrong crowds. After attending church and going public as a Christian, Rachel began to enjoy life and found new ways to help those in need.

She was never the most popular kid in school and had a small circle of friends. She wasn’t mocked for her beliefs, people just left her alone. It was during this time she started to write in a journal, one that would become public after her death. This movie shows us what life was like as a Christian in American high school.

I can understand why this movie would be met with controversy. The story is based on journal writings, so sadly, Rachel wasn’t around to defend or deny any of the feelings expressed in the movie. Maybe that is really how she felt, or perhaps it wasn’t, we will never know. She revealed in writing that she wanted Jesus to use her life positively, but no one would have expected it to be like this.

I’m Not Ashamed was a decent movie, showcasing everything stereotypical about high school and cliques. We tend to be a very judgmental society, and those judgments sometimes, unfortunately, have horrible consequences.

Rachel was a good-natured person who moved on from making bad decisions. She was the type of person who wouldn’t hurt a fly and would probably give you her lunch in case you were hungry. She just happened to be in the wrong place at the wrong time. Her story and writings live on as a reminder of the divine nature that so many of us have. Evil tries to showcase the worse in humans, but even in death, a good-hearted person’s light shines bright. 6/10