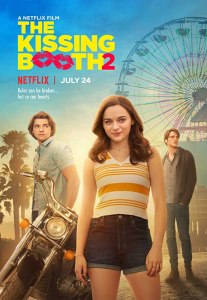 One of Netflix’s most anticipated summer releases ended up being one of the summer’s absolute worst movies. I was a massive fan of the first installment of The Kissing Booth. Although I did not feel as much anticipation for the second one, we did watch it the evening it was released. What a long two hours that ended up being.

I hated this movie. I thought the story was garbage. We spend the entire film focused on the thought of cheating, only to see the one character who was worried about cheating, cheat. It was so hypocritical. I was pretty angry about that, even though I called it. The cheating angle is so predictable that you wouldn’t be able to say that you were surprised that it happened.

Now that the first two movies were so successful, the third one is headed our way in 2021. Honestly, the first movie should have ended the saga, but love triangles sell books and movie subscriptions, so buckle up as our lead character Elle (Joey King) is headed into quite the dilemma.

You may have already watched this, or you plan on watching it no matter what the critics say. Personally, I wouldn’t waste my time to ever watch this again. I’m sure we will watch part three on its initial release, the biggest question I will have is if the story can redeem itself after this dud. 2/10