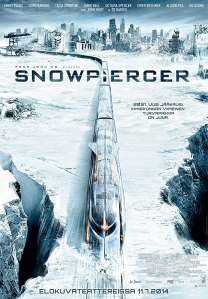 (In 2015, I was in a monthly film club with fellow bloggers. Together we published seven group reviews. Recently I discovered that those posts are gone. When I dug into the archives, I found my contributions. Here they are.)

Snowpiercer came out in late 2013 and was on my watch list because everyone was praising it.

This movie started out fantastic and had me excited for things to come when the revolt started, about 28 minutes in. There was plenty of action with lots of blood, guts, and dead bodies. Our hero Curtis (Chris Evans) was the leader of the “tail people,” the men and women who plan on marching from the last car to the front to take control of the whole train. The concept probably sounded awesome in strategy sessions, probably looked great on paper (even though there is none), but every new car presented a new challenge that most of them were unprepared for.

The movie kept me engaged but started to lose me when Curtis and his rebels discovered horrible secrets about the train, which almost made me throw up. I came to the conclusion that someone with a demented mind came up with this story and was not afraid to spare an ounce of blood to tell it either. My interest took another dip when the rebels reached the “school” car. This was once a violent movie that had a solid story behind it but turned into a strange version of Willy Wonka and the Chocolate Factory.

By the time the body count reached thousands, Curtis finally made it to the front of the train. It’s here that he will engage in a 20-minute heart to heart with Namgoong (Song Kang Ho) that pretty much turned me off from the rest of the movie. I checked out at that point and didn’t care who Wilford (Ed Harris) really was and what would happen to the train or its people.

The ending was so stupid and disappointing that I couldn’t believe I sat there for two hours to get to that point. When it was finally over, I looked up reviews on IMDb, where it holds a solid 6.8 rating, because I wanted to see if anyone hated it like me. Thankfully there are a lot of negative reviews out there, so I don’t feel bad bashing this crappy movie. This movie is pointless and doesn’t make a whole lot of sense. I’d advise a lot of people to steer clear of this one. This train has so many issues on it that it’s not worth anyone’s time or efforts to figure it out only to be disappointed when it all comes crashing down. 2/10