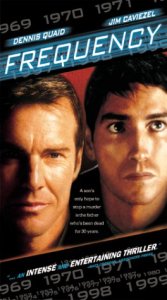 It’s been 20 years since the first time I watched Frequency. I have seen it a bunch of times since then but sat down recently to make my wife watch it. Although she ended up not a huge fan, I still enjoyed it.

Initially, I liked the film because Dennis Quaid’s character Frank Sullivan is a firefighter. Over time I began to appreciate the story and the conflicts Frank finds himself in with his son John, played by Jim Caviezel.

I thought this was a compelling story told through two different viewpoints, 30 years apart. It’s interesting to see a cop (John) try to solve murders that even happened while saving his dad and mom’s life at the same time. As the future changes thanks to actions in the past, the story takes on new meaning and significance.

It was fascinating how Frank and John interacted, both through the airwaves and the light hints they leave each other. Most people would not appreciate the “nonsense” behind these actions, but those are the same people who just didn’t sit back and enjoy this drama.

We all understand that this movie would never happen in real life, but what if it could happen? That’s the mystery behind it all. If we could alter our past and future, what would you do? As two public servants, John and Frank do their best to save lives in 1969 and 1999.

I understand that this film won’t be for everyone. My wife wondered how I can be okay with a story, 30 years in the making, end like it did in the present. She pointed out several flaws that are glossed over for the sake of building up the drama and tension. Although I see her points, I politely disagreed and said it didn’t matter because the story was still enjoyable. 7/10