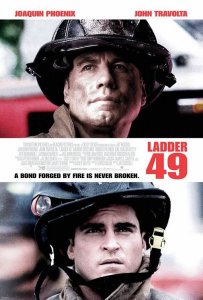 It is well known within the film industry that Backdraft is considered the most celebrated film about firefighters. In the second place, a few notches below should be Ladder 49. Since 2001 TV had flooded the audiences with shows centred around the firehouse like Rescue Me and Chicago Fire, to name a few, but there are few movies about the brave.

I don’t want to ruin the story for those who haven’t seen it, but the ending is pretty apparent just minutes into the beginning. We find Jack Morrison (Joaquin Phoenix) trapped in a fully engulfed factory fire. He’s caught and doesn’t have many places to go. The film then turns back the clock to Jack’s first day on the job.

The movie jumps back and forth between Jack’s attempts to find safety and get rescued, and his career progression in the department. Another parallel story is his relationship and marriage to Linda (Jacinda Barrett). Her character really showcases the emotions associated with being a firefighter’s wife, the stress she had daily, not knowing whether her husband would come home safe and sound.

What makes Ladder 49 an enjoyable movie is a cast which featured a handful of names we have seen in countless other films. John Travolta plays Morrison’s captain and chief, while other members of the crew included Robert Patrick, Billy Burke, Morris Chestnut, and Jay Hernandez.

You may shed a tear or two at the ending, but as I mentioned in the opening, you know exactly what is going to happen. You may complain that the film presents a story about false hope, yet that’s one of the risks associated with the job. This film may not be as dramatic as Backdraft, and there is no “villain” out there taunting out main characters. Ladder 49 is more like a biography, one told to reflect on the life and times of someone who just wanted to help people. Given the subject material the story is based upon, there are not enough of these types of films. 6/10