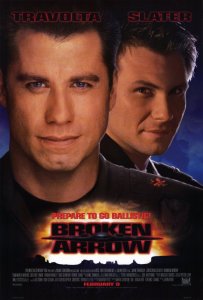 Broken Arrow may be considered a guilty pleasure of mine, although I watch the movie once a year. I don’t have any particular reason why I just enjoy this movie. The best I could come up with is this is the classic 1990’s action I grew up with.

It has been said a handful of times before, no matter what John Travolta does, he is a great bad guy. I understand that some of his movies have bombed, but not all of them. What makes his character, Vic Deakins, so good is his cold and heartless approach to making millions of dollars. Of course, this film uses nuclear bombs are the focal point, but the adventure is in acquiring and securing the weapons are some of the best parts. Deakins will stop at nothing to reach his payday, which includes killing many people and detonating one of the bombs.

He finds himself up against a very admirable good guy, Riley Hale, played by Christian Slater. The movie begins with these two duking it out in a boxing ring, exchanging punches, which is a little foreshadowing since they swap punches later in the film. Hale doesn’t get to share all the spotlight by himself, since he’s up paired with park ranger Terry Carmichael (Samantha Mathis). Together these two, who form a romantic bond, will do everything they can to take down the Deakins team of thugs.

Like I mentioned, this is great a 90s action flick. There are explosions, hand to hand combat, funny one-liners, and two very developed main characters. 7/10