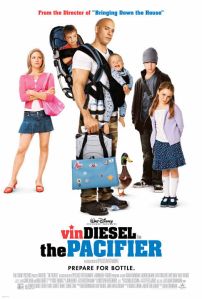 We may be in the year 2020, but one thing remains true 15 years after The Pacifier hit theatres… Vin Diesel still can’t act. Most of us cringe at his stoned faced performances in the Fast & Furious because that is what he’ll always be famous for.

When it was suggested we watch The Pacifier the other night, I didn’t think anything could be worse. That was until the movie unfolded. Yes, Vin Diesel does all the usual things that make you roll your eyes, except this time, it is actually built into his character.

Shane is a military guy who is a leader of his team. Those positions usually require no personality, and their mentality is about following the rules. There’s no bending and no excuses. Things either go his way or not because there is no “highway.” So what happens when this military by the books guy is in charge of a family of kids who have a pet duck, yup, you guessed it, a disaster.

Although this story is cliche at every turn, it starts out rather silly and then turns into dumb fun. I wasn’t a fan at the beginning, but about halfway through, I was curious and engaged. I wanted to see how things panned out for the kids and Shane. No matter how much I started to like it, I did point out that everything that Shane taught the kids (like driving or running the school’s production of The Sound of Music) could not be done in a handful of days. Since this is a comedy, there is no need to fuss about it, but I just wanted to mention it in case you overlook it.

The only aspect of the entire story that I absolutely hated was the character Vice-Principal Dwayne Murney played by Brad Garrett. He was obnoxious, and his performance was so dramatic that it wasn’t even funny. I usually enjoy minor roles from famous comedies in other movies, but for whatever reason, I couldn’t stand his scenes.

The Pacifier is on Disney+ for those of you interested in catching this flick. You may have forgotten it, but you may even own it like we do. I’d recommend this movie as a great family night selection; that is, if the adults can sit through another Vin Diesel movie. The kids will laugh because they won’t understand how much we can’t stand him. Just like Dwayne “The Rock” Johnson and John Cena, if you want to be an action hero, you have to suit up in a family kid movie at some point. 6/10