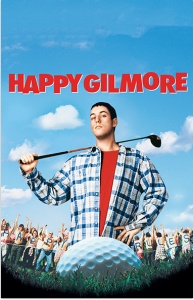 Caddyshack came out in 1980 and may be considered the best golf comedy in film history. However, that was a different generation’s comedy. My generation’s golf movie is, hands down, Happy Gilmore.

Adam Sandler was just launching his career as a superstar when he got sponsored by Subway and went on to win his first golf championship.

Many people hate Sandler as a performer, yet everyone agrees that his best work was in the mid to late 1990s. Happy Gilmore is one of his most beloved performances and is part of his production company name, Happy Madison.

As a kid, this movie was hilarious. Here’s a hockey player with no skills, yet somehow can go up to a tee and whack the ball further than anyone the golf community has ever seen. He’s so unorthodox with his attire and personality. The professional golfers don’t warm up to Happy and do everything within their power to get him kicked off the tour; however, Happy is too much of an attraction for ratings.

One of the best sequences is the celebrity leg of the tour, where Happy gets into an epic fistfight with iconic host Bob Barker. Even today, it is one of the best scenes to come out of a 90s comedy.

It is safe to say that Happy Gilmore will not be for everyone. The crude humour and mockery of professional golf have the potential to turn a lot of people off. If you’ve been a fan of Sandler’s early, there’s a good chance you’ve already seen this film, and you know exactly how many days there are until hockey season. 7/10