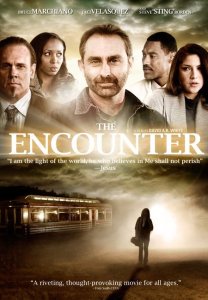 In a growing trend in the film industry, a TV show would be the byproduct of a movie.

This film came out in 2010, about six years before the show was launched on various streaming platforms. I was first introduced to the show on PureFlix and watched the two seasons before venturing back in time to this film.

Bruce Marchiano found his true calling as an actor who can play Jesus in a variety of storylines. In The Encounter, he comes down to visit a handful of stranded strangers, who all need a little faith in their lives.

These random people all need more support in their life since they have strayed away from their faith and can’t comprehend all their suffering. They say God works in mysterious ways, which is how Jesus operates in this story. Through a series of events, he gathers these lost souls to a diner in the middle of nowhere. He will spend all night talking to each one of them, trying to convince them that he is who he says he is.

There are a few skeptics at first, others who believe right off, and then there is Nick (Steve Borden), who just refuses to accept. After hours of talking and discovering secrets about each other, the strangers begin to bond, despite Nick’s best efforts to resist. Each person finally comes to terms with their behaviours and accepts Jesus back into their lives, except Nick, who falls victim to deception.

I was a fan of the TV show because it presented Jesus in a variety of roles, all relatable in one way or another to reality. This movie had the same appeal. The Man is just a regular guy who has all the answers. I feel Marchiano is excellent in this role because of his delivery. When he says things, it feels believable, down to earth. He never thinks he’s better than you or ever puts you down. It’s one of the best qualities of this Man character.

It was fun to watch a bunch of strangers come together, given the circumstances. No one really stood out over another; they all just blended together, except Borden’s character. It was painful to watch one of my wrestling heroes in such a role, but through research, I came to understand what his faith means to him and why he stars in these Christian films.

I’d recommend the TV show and this film to people. It will allow you to enjoy Christian content without the “message” being shoved down your throats. 6/10