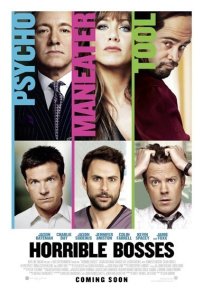 The big question is, what do you get when you put Jason Bateman, Charlie Day, and Jason Sudeikis in a comedy? Well, the answer should have been non-stop laughter. Instead, we got Horrible Bosses, one of the least funny movies to come out in 2011.

Bateman has his trademark dry humour and deadpan delivery. Day also plays characters who eat paint chips and bounce of walls. Sudeikis tries really hard to be a great comedic actor, yet is so hit and miss.

The premise of Horrible Bosses is pretty funny. Given the crazy characters played by Kevin Spacey, Jennifer Aniston, and Colin Farrell, any average person would want to kill their bosses. What makes this story work is these three guys are probably the worse possible candidates to go through with a murderous plan.

I know the movie was enjoyed by a lot of people who want this type of story. I’ve laughed at many of the events in the film; however I consider a lot of it forced comedy. Situations happen because of stupid decisions, which then set forth a series of unrealistic events. Of course, this story is fictional and hypothetical, which is what appeals to people. At some point or another, someone has wished bad things upon their bosses. The three big wigs in this one may be real people out there who go above and beyond to destroy a worker’s life, but these guys did it for comedy, and it wasn’t always firing on all cylinders.

I’ve been a big fan of Jason Bateman’s work over the last 10 years or so. He does have a handful of hits and misses in there, but his acting abilities is what always gets me to watch. One of the most significant drawbacks for me in this movie is Charlie Day. I can’t stand watching him perform in any role, so, understandably, other people may be turned off from this film because he’s a leading guy. The same could be said for Sudeikis, even though some of the stupid things he says or does in a movie will actually get a laugh out of me and leave a long-lasting impression.

Horrible Bosses was the start of something promising. The original spawned a sequel in 2014, and it that particular film failed to live up to its predecessor. Maybe someday we will get the third one, and it will wrap the whole series up. 5/10