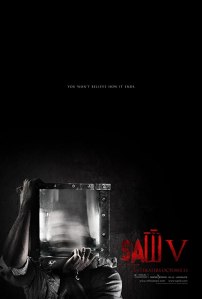 Saw was and is one of the most prolific horror franchises of our generation and this latest chapter, Saw V, is my favourite. I love several things about this film, which include the will to survive by FBI Agent Peter Strahm (Scott Patterson), and the depths Detective Mark Hoffman (Costas Mandylor) will go to survive the enclosing structure.

The writers take us down memory lane again, intertwining characters we never met to ones we are very familiar with. Almost every single person in the franchise has been tested at some point, of course with mixed results.

Most people think this series is about a crazy guy seeking revenge on people who wronged him. If you’ve watched all five movies to date, you will see that all Jigsaw wishes to accomplish is for people to see life in a different way.

Saw V launches the games under new management. One could argue that this particular mastermind is out for revenge more than just a few quarts of blood. Since this is my favourite movie, I will point out that Jigsaw is STILL controlling everything from the grave! He had these plans before any other plans were even made. The only major hiccup in this movie is the FBI is not as dumb as we make them out to be. However, despite the answer (and criminal) staring them right in the face, they continue to lose agents at an alarming rate.

Look, I understand that as the story has progressed, the focus has shifted greatly from horrific traps to a cat and mouse game between departments who couldn’t solve a case if their careers depended on it. Trust me when I say the traps are still there and the writers continue to come up with creative ways for people to die, I mean get killed, I really mean being in the wrong place at the wrong time. 8/10