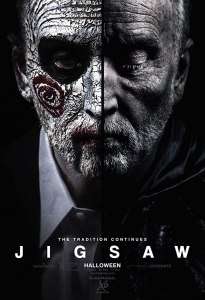 Jigsaw is the type of movie that could be studied in film classes for years to come. I can’t think of a movie off the top of my head that is so misleading that when the shocking reveal happened at the end, I wasn’t able to process everything I just witnessed.

You may think you know who John Krammer/Jigsaw (Tobin Bell) was, but the mastermind of endless blood bath games was so brilliant and calculating, it’s like we never knew him at all.

The franchise’s eighth installment had new and unique traps with many opportunities for the victims to save themselves. Personally, I was a huge supporter of Detective Mark Hoffman (Costas Mandylor) taking over the Jigsaw reigns, so it was rather disappointing to see someone else was behind it all. The saga never goes deep into Jigsaw’s thoughts, but this film shows the man trusted no one to carry out his life’s work and no matter who he left in charge, it was all a test.

There’s a fascinating and intriguing connection between the guys who create the games that get totally disregarded for a handful of movies. While the writers focused on building and destroying several other main character storylines, they let this particular one sit on the back burner. When they ran out of fresh ideas to keep the franchise moving forward, they pulled this one out of the woodwork.

That lack of connection aside, Jigsaw returns to the heart of the franchise. Those in the game have personal connections to John Krammer, and no matter what they say or do, they have all made bad decisions they have to pay for. 8/10

(This review was originally published upon Jigsaw’s release on November 1st, 2017. Since we spent the last few days watching and reviewing the entire Saw franchise, this review was dusted off and given a fresh paint job.)