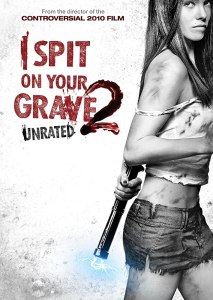 I Spit on Your Grave is not for the faint of heart. The subject material is raw and disgusting on so many levels. The only appealing aspect of the entire series is to watch the carnage that the victims create while seeking their revenge.

In the first installment, we find an innocent girl who ventures into the deep south unknown only to find the worse possible trouble ever. With no returning characters in this sequel, we find an innocent girl just looking for a break in the modelling industry. The story starts in New York City, where you’d be hard-pressed to accept any “free” offers from a bunch of eastern European accents, who only want you to take your clothes off.

From the rejected photoshoot to the break-in and kidnapping, the story seemed pretty simple. But then we end up in Bulgaria, where our main character is about to be used as a sex slave and then buried alive.

The scenes depicted in this story are not on the same level as the first one, but everyone gets their turn. When our victim escapes, she is only lured back in…because she’s in a foreign country. When she is buried alive, I was so curious about how she’d be able to escape this one and get her revenge. When she is freed for the final time, it is quite interesting how they pulled it off.

While healing and preparing, there is a whole angle with the priest at a church. The movie teases whether or not he can be trusted, much like the cop who originally took her case and let her go back into the care of the bad guys. These moments seem pretty cookie cutter for foreigners who end up in non-English speaking countries.

Unfortunately for all your horror fans out there, the murders are not on the same level as the original. They are still pretty gross, especially the night club scene, but the writers opted for gore over bloodshed. If you are a male viewer, you may struggle with the main bad guy’s death; however, any female viewer would appreciate that any guy who has ever wronged them suffers the same fate.

Part II is not on the same level as the first one, but it didn’t have to be. The story in this one felt more realistic since women go missing and end up as sex slaves every day. 6/10