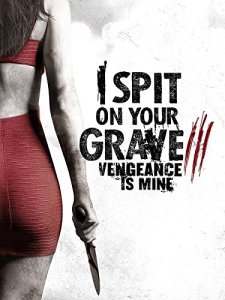 I Spit on Your Grave III was probably one of the worse movies I’ve ever seen in my life. When you talk about unnecessary movies and sequels, this movie should be at the top of any list.

The film cuts back and forth from Jennifer in therapy to group therapy, normal life, and killing. It appears the movie is being told in a flashback format, and you’re left to wonder if this is real or just a dream. Even when her therapy session ends, she kills many random people in jail, only to find out it is all in her mind! It is so annoying because there is no defined line between what is real and what isn’t.

I sincerely hope that Butler got a pay increase to be in this movie because it didn’t need to happen. I’m disappointed that the writers who own the material couldn’t come up with a new bad idea. Instead, they came up with this God awful sequel that really spits on the legacy of the original movie (1978), the remake (2010), and the sequel (2013). My friendly advice would be to steer clear of this one, even if you are interested to see what happened to Jennifer when she tried to return to normal society.

We don’t give zero ratings around here; however, we will always point out that certain films deserve that honour. I Spit on Your Grave 3 would be a front runner to be the first. 1/10