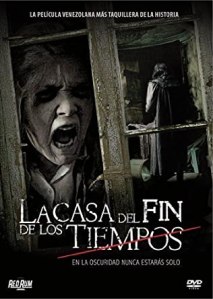 The House at the End of Time was definitely one of the hardest movies I’ve ever had to track down online. To describe the entire process would be more than I feel like typing, but my efforts even resorted to me joining the horror service Shudder because the title was in their inventory. Turns out, it was only in their American catalogue, not Canadian.

Thankfully my endless research paid off, and I found it on YouTube without subtitles. This film originates from Venezuela and is in Spanish. I did my best to follow the story and used the plot summary on Wikipedia to fill in the gaps.

I was quite curious about how the story would play out and admit that the movie failed to entertain me for the first 45 minutes or so. After reading the summary, I got to finally understand the handwritten note that Dulce (Ruddy Rodriguez) shows her husband. Since the note is from the future, no one wants to believe its authenticity. It was a minor misunderstanding on my behalf but did not ruin the build-up to the finale.

To provide a quick recap, Dulce served 30 years to murder her husband. As part of her parole, she was forced to live out the remainder of her days in the house where she committed the crimes. The only problem is, she never killed her husband and one of her sons went missing the same night.

I will not give you any spoilers because it will ruin the entire movie, subtitles, or not. All you need to know is elder Dulce comes face to face with her missing son, who hasn’t aged a day in 30 years. Together they join forces to fight off the evil they all of a sudden find themselves surrounded by.

My heart was breaking as I watched Dulce try to comprehend what had happened and the ultimate sacrifice she had to take to make everything right. As scary as this movie was supposed to be, it was all cheap thrills and parlour tricks. There was a lot of emotion involved with each character, and it really showed through the end.

Despite my best efforts to find a subtitled version of the film to thoroughly enjoy the experience, I was still able to appreciate the storytelling and performances. The House at the End of Time doesn’t seem necessary to qualify as a scary movie that needs to be enjoyed around Halloween. It is a dramatic movie that should be enjoyed anytime. 7/10