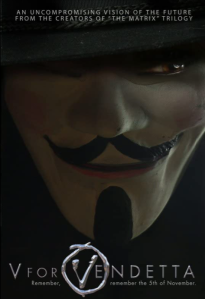 There have been so many important dates in the history of the world and film. One of the most memorable dates will always be November 5th.

For those who are not familiar with anything I just referenced, here’s a short recap. Back in the 1600s, Guy Fawkes was arrested with a massive pile of explosives meant to bring down the United Kingdom. Fast forward a few centuries and the United States are no longer a superpower, and the UK is now the toast of the globe.

Chaos and destruction begin to mark Fawkes’ anniversary, all orchestrated by a mysterious man named “V,” played by Hugo Weaving. Through a series of events, V runs into a young girl named Evey (Natalie Portman) and the two forms an unbreakable bond.

In anticipation of next year’s events, V murders everyone that is associated with the Chancellor. While the agency tries to figure out his motives and next move, V sets Evey up to take his reigns as he’s willing to risk his life for the cause.

I haven’t spent a lot of time recapping movies lately but felt this particular film needed it. There are many moving parts to the story, even though it is a straightforward revenge story. V was wronged as a kid and had the power/resources to seek out his tormentors to kill them.

However, the world political landscape hangs heavy on the entire story. In an attempt to corrupt the world, things go horribly wrong, and someone like V is left to walk among the people. It only fits that the United States Presidental election is held on or around November 5th. That day usually takes the world by storm as the world waits patiently to see their next move.

In this fictional future, the UK is the best of the rest, and there’s so much wrong with the way they run things. Just like in real life, people struggle to deal with the situation they find themselves in. Whether it is a lack of courage or guts, most people just accept life and roll with it. V turns into a cultural hero for his determination to bring the entire system down. His work is really misunderstood, and when after all the bombs have gone off, there will be only one person left who really knew who he was.

I’ve never been a fan of this movie or Natalie Portman, which makes watching this movie a chore. I recently watched it again, which may have only been the fourth or fifth time in my life. Now that I have watched this movie again with the sole purpose of reviewing it, I can safely say this may be the last time. I enjoy Weaving’s performance, mostly the violence, yet he is so educated and sophisticated, making him a great character.

Whether or not you are a fan of the movie or story, you will always remember the 5th of November. 7/10