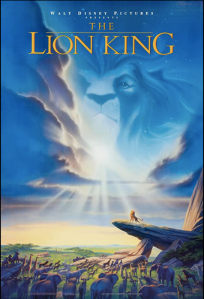 I was only 12 years old when The Lion King was released and gave Disney one of the greatest economic boosts in their history. As a kid, I never got into the hype of this classic movie. However, the soundtrack was one of the original five CDs I ever own (still got it too).

As I grew up, my memory faded, and I started to believe I had actually never seen The Lion King. I barely remembered it and only knew what I knew from the soundtrack. Fast forward to 2012 when Disney rereleased Simba and his pals to the big screen in 3D. I venture out to watch the epic drama on the big screen and mark it as my first time.

Since then, I’ve seen it a handful of times, which has allowed me to stand back and look at the film from a different perspective. Sadly it is not as magical as you remember from your childhood.

I think my biggest problem with the entire story arc is the fast track Simba finds himself. I understand the movie is short and needs to cut to the point, but I’ve never been a fan of Simba walking on a log singing Hukuma Tata and grow from cub to full-grown lion in like 18 seconds.

Meanwhile, Scar, brilliantly played by Jeremy Irons, destroys the pride lands, and we only get to see a glimpse of it. That is the end of it yet, actually. The current state of affairs is pretty bleak, but there’s no expansion of the details because Simba is back and ready to square off.

Scar is one of Disney’s greatest bad guys and deserves a boatload of credit for doing so much destruction with such little screen time. Not only does he knock off a king and run his son away, but he also singlehandedly turns one of the world’s most beautiful places into one of the worse places to live.

There are so many amazing voice actors behind the characters, including Matthew Broderick, Billy Crystal, James Earl Johns, and Whoopi Goldberg. Disney is famous for creating classic masterpieces based on other people’s written work, and The Lion King is no exception.

Hailed as one of the animation studio’s greatest works, they took something special and destroyed with a live-action movie some 15 years later. Some people love and adore this movie, sadly I am not in that crowd. 7/10