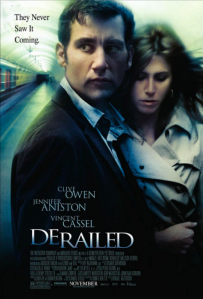 Derailed is the kind of murder mystery with many twists and turns that even when you think you got it all figured out, you don’t.

I’ve enjoyed Clive Owen’s work for a long time, and for me, this is one of my favourite roles outside of his portrayal as King Arthur. He’s Charlie Schine, a successful marketing agent who decides to cheat on his wife. Little did he know what kind of trouble is was going to find when he met Lucinda Harris, played by Jennifer Aniston.

The adulters find a nice little hotel to commit their affair, and everything looked promising until their room is broken into and they are mugged. LaRoche (Vincent Cassel) is a ruthless rapist who takes and takes until there’s nothing left to take.

After a rough night, everything seems to have blown over until LaRoche resurfaces and causes so much mayhem, Charlie will go to the extreme to protect his name, family, and job.

I enjoy this movie because LaRoche is a cunning thief who has many people assisting his crimes. It may come as a surprise to many, or maybe it will shock you to your core like it did to me. His greatest worker is someone you would least expect. However, when you look back at it all, all the signs were there; I guess I just missed them.

The ending is perfect because just when you think Charlie wouldn’t turn bad, he indeed has a dark side himself. When he brings down LaRoche’s scheme, you have to admire his determination and guts to go through with it all. He may have been a dirtbag for attempting to cheat on his wife, yet he does redeem himself by bringing down the bad guy.

Derailed serves as a reminder that no matter what your intentions are, whether they are good or bad, there can always be consequences. 8/10