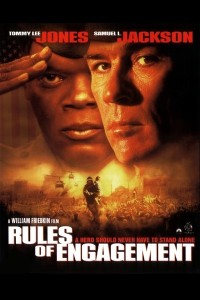 The argument could be made that the film A Few Good Men, starring Tom Cruise and Demi Moore, would be considered the greatest military courtroom drama. In the second place, I would love to nominate the Rules of Engagement.

Call me crazy, but this is one of my favourite Samuel L. Jackson roles. Gary Pierce and Bruce Greenwood are so rotten to their core in this one that it took me several years and movies to get over their performance. Tommy Lee Jones is again brilliant as the lawyer who couldn’t fight his way out of a parking ticket, yet he’s now trying to save the career and reputation of his best friend.

When you’re in the military, they say that you have no control over what you do and where you do it. I’ve never been in uniform, so I can only believe. what they say. When you’re one of the best at what you do, you take the tough assignments and don’t ask questions. Sadly, when things go wrong, it is never someone else’s fault; it becomes yours by default.

Jackson plays Colonel Hayes Hodges, a guy who did his job, by the book. When his superiors end up on every newspaper’s front page because of the mess the operation turned out to be. There’s the only a problem, the guy who did his job didn’t cause the problem. Hodges is thrown to the wolves, and no one bats an eye; they found their fall guy.

The trial, which the entire movie is based upon, is brilliantly shot. The witnesses tell their stories, and when it’s time for Jackson to take the stand, he gives an award winning performance. Already known for his ability to act, it is amazing to watch this man stand and defend himself when the wolves are clawing away at his body.

The tension builds and you can’t really tell which way the trial is going to end. No matter which way it goes, there is a stigma hanging over the trial and only after the final verdict is handed down do we see the consequences of everyone’s poor decisions.

Overall, a great courtroom drama with tons of good and bad people to root for. Whether you’re in the military or a civil servant, anyone interested in the law or trials will enjoy the performances in this film. 8/10