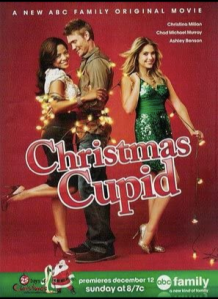 Once upon a time, a story about a guy named Scrooged got visited by three ghosts. That classic tale showcased the change even the most stubborn person can go through.

Fast forward to 2010, where we find Sloane Spencer (Christian Milian) appears to have it all, including an upcoming promotion. Her only stumbling block is her number client Caitlin Quinn (Ashley Benson), who just died.

Caitlin comes back and walks Sloane through her life, and together they revisit the good and bad. Sloane witnesses all the fallout from her poor decisions and the fact she lives her life in the fast lane.

The saddest thing about Christmas movies is they are just carbon copies of other films and story angles. There was absolutely nothing new presented in Christmas Cupid. The only charming aspect in regards to this particular story was the characters.

You will spend the entire movie upset about Sloane’s character and her selflessness. Caitlin will annoy you when she pops up in one scene, makes some jokes, and then disappears again. The only character I enjoyed was Patrick, played by Chad Michael Murray. You can’t help but sit back and feel bad for the guy who just gets his heart broken again and again. Does he really need to up with Sloane in the end? That is really up to you to decide. I was against it because he deserved someone so much better. I don’t even care that she changed and had a life-altering experience, but like most romantic comedies, we never get to see how successful the couple is six months later.

My wife has wanted me to watch this movie for a few years now. We recently just crossed it off the list, and even though we own it, I can’t guarantee that I would be down for another viewing. 3/10