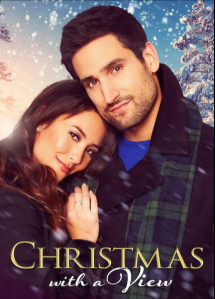 The more I watch, and the more I write, I look for certain things in movies that make or break a story for me. I’ve never afraid to like the cheesy ones and the predictable ones while also standing up proudly against the blockbusters adored by so many.

Christmas with a View worked for me because I felt the connection between our two main characters and the sincerity in their hearts.

Clara Garrison (Kaitlyn Leeb) is a restaurant manager on the rise. She’s failed once at her own dreams, but that hasn’t stopped her from dreaming even bigger for the next project. Her life is thrown for a loop with reality TV chef Shane (Scott Cavalheiro) is hired to be the top chef at her restaurant.

These films always make you chuckle. You can see the story play out from the first few moments, and you are never left surprised when it all falls apart to set up an epic finale.

Clara had no interest in Shane, or so she said. Shane, meanwhile, was instantly attracted and wasn’t shy to make the first move. You learn more about each character and why they both chose to come to this resort for work. Clara is personally attached to the town, while Shane is returning a favour. However, just when you thought this was all about romance and cooking, there is actually a bad guy who plans to sabotage it all.

I enjoyed Christmas with a View because the story was important. The ending featured an exceptional Christmas gift that showed me that Shane was indeed a great guy and respected Clara’s wishes and desires. The ending really melted my heart and reminded me why I am such a sucker for these happy ending stories. 7/10