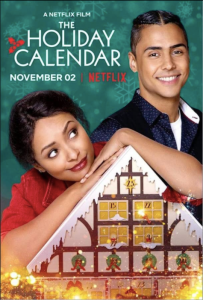 My wife had previously watched The Holiday Calendar when it was released in 2018. She recommended that we watch it together because it seems like the kind of movie I would enjoy. She was right.

Abby Sutton is a photographer with a lame job as Santa’s helper. She dreams of opening her own place and taking pictures that she wants to take. Her grandfather gives her an antique advent calendar that comes to life on its own and begins to alter Abby’s life.

I was on board with some of the changes since she is fortunate enough to meet a handsome single dad, and the two begin to date. Meanwhile, her best friend Josh (Quincy Brown) is left in the wings with his feelings. Sadly Josh is painted as a loser kind of guy, a “world-famous traveller” who maintains a blog for a living. He’s never given the proper set up as a character, but there’s a reason for that at the end.

Through a series of events, Josh and Abby have a fallout, typical for a movie where the two leads are best friends fighting the urge to finally be together. Once they are introduced together in the beginning, destiny always brings them together in the end.

I didn’t want them to be a match, even though it made a lot of sense. Abby was never going to stay with her handsome single dad because he had other life priorities, including showing off how great of a dad he was. It was a tough lesson for Abby to learn, but it was life-altering.

After losing the calendar and her boyfriend, Abby decided it was time to make it all independently. It was a huge step for someone who was always shy to take the next step.

I really loved the ending because Josh stepped up in a way his character was not built up to do. I thought it was amazing what he does for Abby. It was an act of true love. He always knew what would make her happy, and he just went out and did it. I admired his courage to be so bold. If the ending doesn’t win you over, I don’t know what else you could ask for in a romantic comedy. 8/10