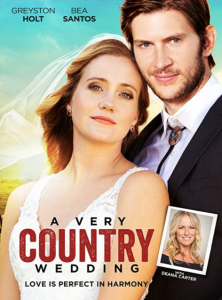 If you sit down to watch the sequel to A Very Country Christmas, A Very Country Wedding, you only need to know two things. The first is, if you watch it with your skeptical partner, they will sit there and say the word “forced” over and over. She will be referencing the fact the entire story is forced upon the characters.

The second thing is this film is jammed packed with pointless drama, which causes unnecessary complications between our two leads, who are about to get married. Zane (Greyston Holt) is still a popular country star, while his single mom girlfriend Jeannette (Bea Santos) is about to open her own small business.

Unfortunately, their wedding is postponed because Zane’s expiring contract will destroy his professional life if he doesn’t meet the final requirements. While on his mini-tour, the press thinks he’s single and stir the pot by insisting he’s dating a girl he met at one of his concerts, who shows up to every event he’s attached to. Whoever wrote this novel decided it would be more interesting to create conflict to sell their story instead of working on the main characters and their budding romance.

I enjoyed the first movie and was truly disappointed with the sequel. Since this is only the middle chapter, one can only hope the third instalment will save the franchise from being a disaster.

There’s a lot to hate about Country Wedding. Zane spends most of the time being a jerk since he wants to find a balance between fame and family, yet can’t do a single thing to get out of his own way. He allows other people to call the shots and, with that, drive the wedge deeper into his relationship. Jeannette, meanwhile, is a saint for putting up with all the crap. She had to know that this was the deal since he’s a megastar, but some of her experiences were so unnecessary.

As in the first one, many minor characters get way too much screen time with their own relationship issues. These movies are almost two hours in length, which means all their other characters contribute to the excessive run time.

I’m committed to these movies now and plan on seeing them until the end. I can recommend the first one, yet I refuse to do the same for the sequel. 1/10